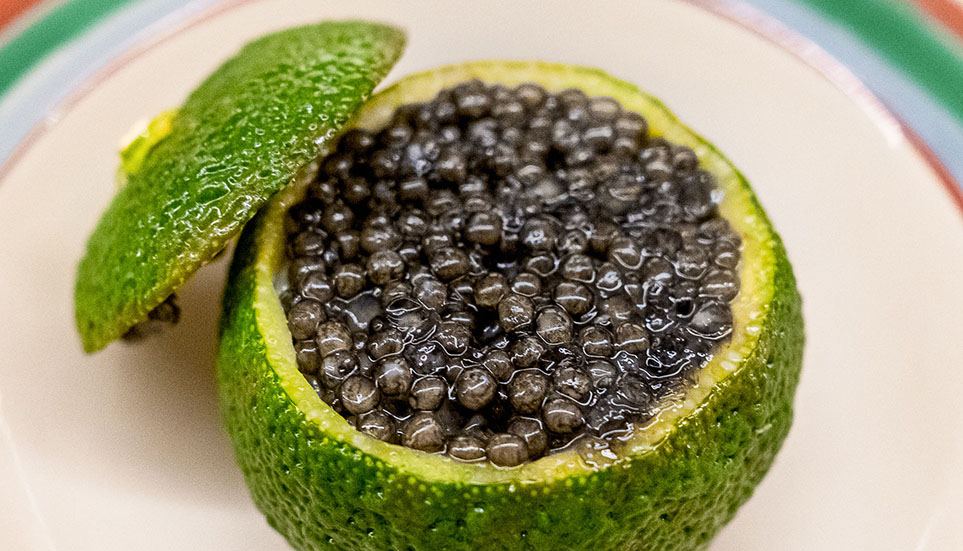 Caviar and Chicken Wings During the Same Meal?

Kutan’s unique approach to Kaiseki cuisine is loved by the Tokyo gourmet community. Owner Chef Kotaro Nakajima distinguishes his restaurant by featuring ingredients that fall outside the bounds of traditional Japanese cuisine. Each of his dishes are meticulously prepared, and occasionally incorporate an element of novelty. A good example of his vivid approach to cooking is his green yuzu dish. It is made by tightly packing caviar in a fresh green yuzu fruit, delicately carved out and made into a bowl. As you place your spoon inside, you will quickly discover a layer of vinegared rice and squid garnished with an egg yolk that were initially concealed by the caviar. The salty flavor of the caviar brings balance to the sweetness of the squid, and the egg yolk adds a deep rich flavor. Lastly, the sour flavor of the yuzu ties all the other flavors together. Surprisingly, during the same course, you can also enjoy Kutan’s off menu seasoned tebasaki (chicken wings). This is unexpected as it is rare to see chicken wings served on the same menu as caviar, let alone on the menu of a 2 Stars Michelin restaurant. This confident, playful approach to Kaiseki is what makes Chef Nakashima’s cuisine so memorable. Chef Nakashima chose to feature ROCOCO on his menu for the simple reason that he found it “purely delicious”. To Chef Nakashima, ROCOCO has a refreshing flavor that goes well with savory dishes such as fried chicken wings, and with salty dishes such as caviar. Furthermore, since it has a gentle, fruity flavor, it is also popular among people who do not typically like beer.

Chef Nakashima’s vision for Kutan is to take a “modern classic” approach to kaiseki cuisine. He developed his open minded approach to cooking during his experiences working in various restaurants overseas. The ability to blend tradition and playfulness makes Chef Nakashima’s cuisine at Kutan stand out among the many japanese restaurants of Ginza. At Kutan every effort is made so that all guests enjoy their experience, whether they are conservative or adventurous diners.

After training in his hometown of Fukuoka, Chef Nakashima moved to the United States at 24 years old. It is there that he honed his skills at Matsuhisa, the predecessor of world renowned NOBU. Chef Nakashima notes that his experiences overseas gave him clarity on what to appreciate about foreign cuisines, as well as what to appreciate about japanese cuisine. After returning to Japan, he worked at a famous Michelin awarded restaurant before opening Kutan in 2018. Kutan was awarded One Michelin star only one year after opening, and was awarded Two Michelin stars in 2021.